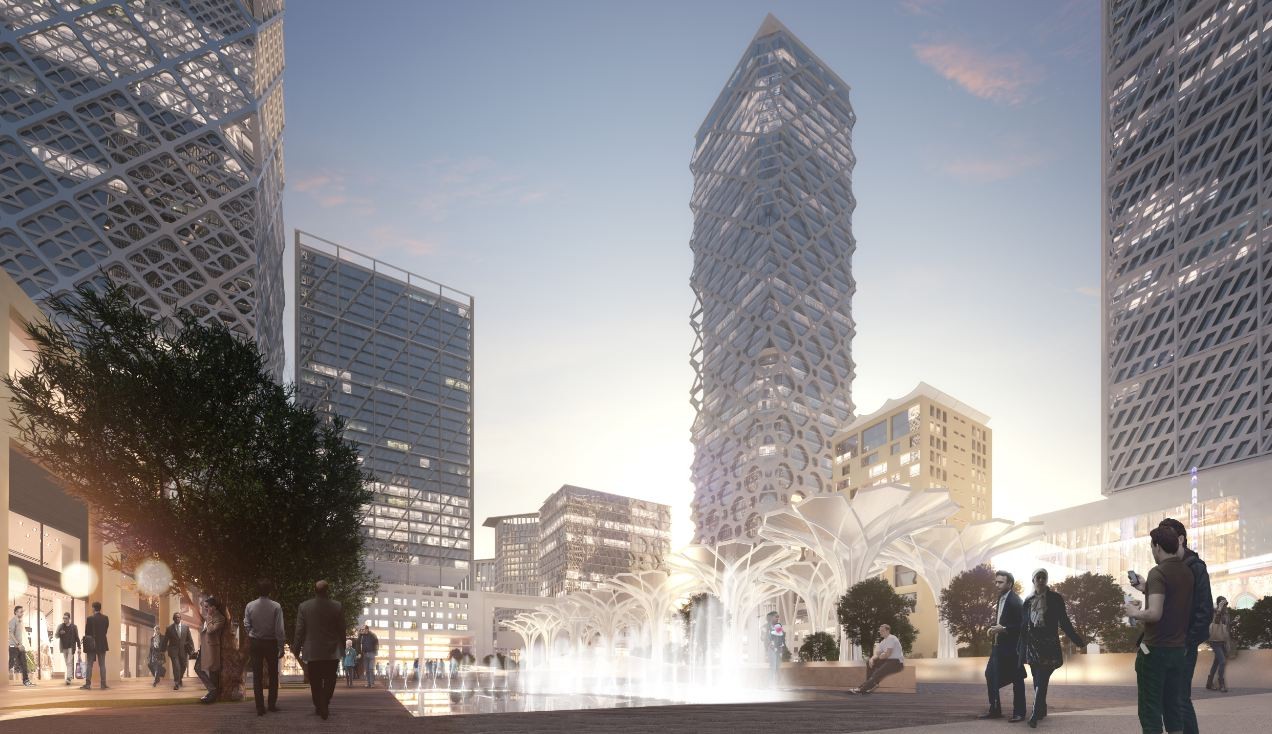 Captial of the world Istanbul:

The Istanbul new international financial district which will match New York City in its beauty will put Istanbul on the map of global financial centres, as well as the great role it will play in promoting the growth of the economy in Turkey and in raising the financial mobility in the country, due to the centrality of Turkey’s location between Europe, Asia and even Africa.

HOK International is responsible for designing the financial centre of Istanbul, and the company relies in its plan on four factors: culture, trade, civil functions and governance, as the project will include two office towers in Istanbul’s new international financial district, in addition to several residential islands divided into different sizes, and there will also be playgrounds Indoor, commercial and open spaces encircling all buildings, in addition to green spaces and common areas.

Istanbul one of the top 10 economies in the world by 2023:
And by 2023, Turkey aspires to reach the top 10 economies in the world. Turkey’s economic and political ambitions are broad and significant at the international and domestic levels. That is why the Turkish state is investing in its infrastructure significantly, as Turkey has built several huge infrastructure projects over the past years. Infrastructure, including huge bridges and long deep tunnels, has also invested in highways and in the public transportation network such as the subway, as well as the international airport, the new Istanbul Airport, which is one of the largest airports in the world.

The most important financial companies will be present on this land with an area of ​​303,000 square meters, and it will be like the next legend in Istanbul with a shining star, and it will participate with its counterparts from the capitals of the global economy such as New York, Moscow, London, Qatar, Dubai, Singapore, Hong Kong, and Tokyo. As for Istanbul’s position, it will be more enhanced than its predecessors because of its strategic location, and it will be an opportunity for Istanbul to gain more financial capacity and global standing.

Among the large companies and government banks that will be present in this strong financial centre: are Halk Bank, Ziraat Bank, Vakıf Bank, the Capital Markets Authority, as well as several companies affiliated with the Banking Regulation and Supervision Authority, and we will not forget to mention the Istanbul Stock Exchange, as several major banks that manage funds abroad requested their inclusion. In the Istanbul new international financial district.

As for transportation:
Istanbul’s new international financial district is located on the Asian side of Istanbul between Ümraniye and Atasehir, and this is what was mentioned earlier in our article. It is a huge strategic location and this will make it very easy to access. Since this project will receive the lion’s share among all the huge economic projects in Turkey, it is natural for the government to pay special attention to it, and this is what will happen, as the Istanbul municipality plans to establish a metro line that passes from the new Istanbul new international financial district, which will provide future metro connections and will also secure New circular roads and all this is in the interest of visitors to Istanbul new international financial district and its employees as access to it will be very smooth.

Magnets for Foreign Investors:
According to the information and data that were discussed with economic experts, the new Istanbul International Financial Center will be a major economic shift for Turkey in general and Istanbul in particular, and this will be a reason to increase foreign investments as well as Turkey’s domestic product.

As soon as the business of the financial centre begins in 2022, it will work to attract foreign capital to the country, especially the Arab Gulf countries and European countries.
It is expected that the Istanbul International Finance Center will open its doors to nearly 150,000 employees looking for a job. This, in turn, will increase the value of the area and will increase the demand for it residentially as well.

As for licenses, it will provide investors with great facilities to obtain licenses as well as start pumping investments and data on multiple sectors and in all types of investment, and facilitating the issuance of licenses does not mean leniency in security issues. As are public rights.

Specifications and features of Istanbul’s new international financial district:
-One of its most important features is that it will be a magnet for pioneers and businessmen at the local and international levels.
-Istanbul’s new international financial district has an important strategic location on the map as it is located in the capital of the world Istanbul, moreover, it is located in one of the most important areas of Istanbul.
-Attracting capital from all over the world.
-Close to the E80 and E5 motorways.
-The value of the area as a whole has increased significantly, so the surrounding area, thanks to the centre, has a high investment value.
-It was built on a land of 303,000 square meters.
-And one of its most prominent features is that it will add to the region several infrastructure projects, including the third airport, which will be one of the largest in the world and will accommodate 200 million passengers every year, and three metro stations will be established to serve the financial centre specifically.

It is worth noting that the city of Istanbul is on a plan to transform it into the capital of Islamic finance, and this is what will happen soon, as Istanbul is taking firm steps towards its goals to advance the banking and finance industry in accordance with the provisions of Islamic Sharia, and this will bring thousands of investors towards investing in Istanbul.

For this reason, OG Real Estate Investment Company in Turkey offers you its advisory services and other services such as airport reception, to help you get the best real estate option with the best return on investment. A property you would like to invest in. And upon your choice, we will be with you during the legal procedures following the stage of sale, such as extracting the title deed and registering it through the webtapu. Do not hesitate to contact us through the available means of communication.